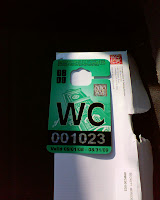 English 543, 20th Century British Literature, or I’m So Giddy About This Fancy New Computer System in my Classroom That I Shall be Treating You All Like Sixth Graders. i? am not a Class Participator. i? do not “do” group projects. i? also cannot stand james joyce. a portrait of the artist as a young man? makes me want to End It All. and of course we’re starting out with it. what i’d like to pick on at this particular moment, however, is the item featured in the photograph to the left. that? is an $80 piece of cardboard. my attitude towards this Cardstock Wallet-Raper was not aided by the NSYNC/Backstreet Boys/Savage Garden/insert-random-boy-band-here blaring out of the speakers mounted to the booths outside the transportation building (which the bus wanted me to know Is Bevis Hall!). Ã‚Â what is it? my OSU parking permit. for the right to park half an hour from my class and be rudely awoken two mornings a week by a newly En-cheered Bus, i pay $80 a year. why? well, mostly because i don’t have any choice, but also because the parking permit for the closer lot is like $200 per annum. and frankly, the fifteen minutes it would save me are JUST NOT WORTH IT.

also, do you recall my post concerning OSU’s shibboleth/password fail? well, apparently Teh New Site ain’t quite done with the whole Passing Out thing, because today i received an email telling me that OSU will soon be replacing our buckID (see that Clever Word Play there? yeah.) with actual numbers rather than our social security numbers, and directed us to the Buckeye Link, where we might be able to look up our fancy new numbers. the shot to your right reveals what greeted me upon my entrance to that page. now, i don’t know about the rest of you (and yes, that is Google Chrome. i’m a google whore.) but i’m pretty sure i don’t see no stinkin’ numbers in that box. is it perhaps one of those Spoiler Boxes, where you must highlight the text to see it? it is not (tried it). is it perhaps simply arguing with Chrome’s rendering devices? it is not (firefox was no better). is it perhaps that NO ONE AT OSU CAN CODE? it may well be. WE MAY NEVER KNOW!
(today’s Subtheme is Capitals!)