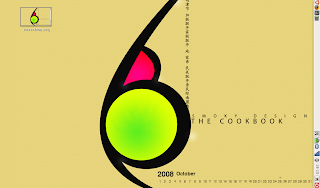 for my aforementioned birthaday, my momeh bought me a fancy 8 GB SD card! yay~ i specifically requested it, so i could install ubuntu-eee on it. i’m hesitant to touch my hard drives (which turns out to be a good thing, since the main partition can’t decide what the hell it was formatted as), plus i think that an entire operating system on a portable little card the size of my finger is way too awesome for my little geeky heart to handle. (^_^) so i installed Ubuntu 8.04, regular old hardy heron, and then installed some custom kernals from array.org. you may or may not really understand some or all of that, but i would like you to know what i really like, and that is this: detailed instructions. the array site a) is nicely plain, b) gives you what you are looking for w/ the minimum of fuss and c) links to some fancy sites that help make ubuntu on the eee even awesomer! now, couldn’t i just have installed the pre-compiled, pre-set, pre-everything ubuntu-eee and not have had to worry about bash/shell/scripts/whatever? well, yes, but not if i wanted to install it on my flash card. so, because i just had to be uber nerdy, i had to do it the hard way. frankly, i kinda like it this way. i think that netbook remix would’ve turned me off. now my little Parsnip feels like an indy netbook. eh? wtf is Parsnip? that’s my laptop’s name. A Parsnip’s Length. yes, i know.

the other thing i did this week was and Empty Bowls event. wtf is empty bowls? jeez, we’re a curious lot this evening, aren’t we? (^_^) well, for the full scoop, you can check out their official HP, but basically, you get to make bowls and glaze them and then sell them, and the money goes to help eliminate hunger. last year i made (if i do say so myself) a couple of rockin’ bowls (which i don’t even remember if i blogged about or not, and one of which soon became the basis of my successful NaNo 2007 run) but this year, we missed the half of the event where you actually make the bowls. (T_T) we did manage to get in on the glazing, though, and we did have some fun. 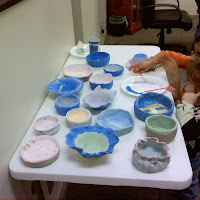 i think there weren’t as many bowls as we had last year, but some of them were really cool. that one at the top of the second picture was done by Deacon Douglas, mentioned in previous posts. that one at the bottom of the second picture i have no idea who did, but the parts that are blue there? that’s actually clear glaze, so those will turn out clear after the things get fired, and the dark part is red. i piled on the red glaze around the top edge until it dripped down the sides and then i put the clear glaze on. hopefully, it’ll end up as awesome as i’m picturing it. (^_^)

oh yeah! speaking of successful nano 2007 runs (not for a while now, no) we got an email from the Office of Letters and Light the other day saying that amazon’s decided to step up and publish everybody’s winning 2007 novels! yay! i have six months to get my thing marginally prettied up and submitted. for those of you who don’t recall the horror of last year, i wrote the same story 50+ times, each time in a different style. some of them? kinda cool. most of them? not so much. like the pig latin version? possible the coolest thing evar. the angican church service version? lame, even for episcopalian me.