that’s right, because we’re 32 days away from the most ass-kickin’ NaNo yet. i ask you, what can go wrong with a viking hat THAT BIG on the participant logo? (^_^) well, of course, not having a plot or even a semblance of one is something of a badge of honour amongst us NaNo…nians (?) but as it turns out, i actually have a preponderance of possibilities this year. there’s a whole forum for people who are doing NaNo who aren’t actually noveling, so i could do a whole month of short stories. not that i haven’t done that before, but i could up the ante by sticking to the 50,000 word count and maybe even demanding that all the stories be interconnected. i certainly have a series of connected stories already that i could do, and i wouldn’t even be cheating that much, as they pretty much all need a rewrite from the ground up. then there’s my original plan, to rewrite Blessing The Troops from two years ago, and i am working on editing the thing, but the further i get into it, the more i end up feeling like i don’t have enough political intrigue skill to write this thing in any kind of interesting way. (T_T) not that i’m not eager to do research! not that i don’t own about three books on medieval warfare and tactics and politics! i’m just not certain i can do them all AND get my classes done properly AND bind books simultaneously. not that i’ll be doing much of anything besides writing in november anyway, but the research part really is going to be important for that story, and i’d like to do it right. the third, and currently likely, possibility is doing a completely unrelated story, one that i’ve been thinking about for a couple of months now. it’s one part james bond, one part melodramatic trip down memory lane and maybe one part island of lesbos. that’s right, lesbian spies. i think, how can that be wrong!?

not that there weren’t things today that were Wrong. actually, last night, too, but we’ll get to that in a moment. what was wrong today was a) it was monday, b) my class is Early and c) 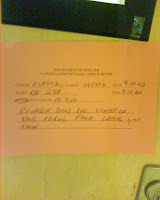 that’s right, class was cancelled. i? really freaking HATE these pink slips. when i see one? i want to cry. all was not lost, however. i had my laptop with me, i could indeed check my email as the note bid me do. turns out my prof was down with a case of food poisoning (today’s lesson? beware shady chinese takeout.) and so we shall begin our discussion of James Joyce’s A Portrait of the Artist as a Young Man (a book i would like to join publisher Edward Garnett in dismissing out of hand) on wednesday rather than today. so i’ve got at least another day to find some deep, long-hidden reserve of Giving A Shit with which to finish this stupid book as quickly as humanly possible. section three? made me want to kill myself. i thought, can i just end it already? the reason the sparknotes page is the first link on google for this book is because people just aren’t strong enough. they are defeated by fifty pages of vivid imagings of hell and its environs. they give up twenty-five pages in, struck by the sudden revelation that they really don’t give a flip about modern irish politics. do i know who Charles Stewart Parnell is? vaguely. do i care enough to sit through 100+ pages of stream-of-conciousness crap about the boy’s father’s relationship to this man? i do not. nor will i ever. too bad i have to read this for a grade. (T_T) i should actually stop complaining. it’s been a while since i’ve been forced to read something, and i know in my head that this is one of those Books That Should Be Read that we’re always hearing about, i just wish it didn’t make me want to leap headlong from the nearest window.

back on track with the exciting things that happened today, i was at the bus stop, waiting to head straight back home (T_T) when this flash of black and blue running suit books past me. it takes a minute to register, and i have to step out from a lineup of bus-waiting peoples, but i managed to catch proof of the elusive sarita in her natural habitat. you won’t be able to tell it’s her, because by the time i got to snap the photo, she was but a blur on the distant horizon, but i know it’s her, and she’ll know it’s her – if she ever turns out to really browse the internets. (^_^) 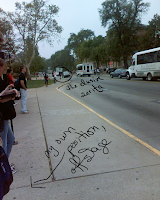 ha! (^_^) well, it was 9.34 AM, so she was probably late to class, and she was bookin’ it down the street at such insane speeds that literally i did not even realize it was her until she was totally down the street (^^;) but there she is anyway. victory, or something like it.

when i got home, i also did something good, and that is begin the revision of the piece i’m turning in for fiction workshop this winter. well, the piece i’m turning in so that i can get in to fiction workshop this winter. the course is by permission only. the prof said to turn it in “by the end of October” but we all know that if i let myself believe that, i’ll turn it in too late. so i decided to jump on my free hour and a half (T_T) and get to it. i got about halfway done before i had to go to work, but it now WILL get done. i can finish it up either tonight or tomorrow night and then turn it in wednesday WHILE I’M ALREADY ON CAMPUS! how clever!

speaking of clever (lord, this post is running long) i was at the grocery yesterday, looking for qtips (because no qtips = Bad) when i happened upon the following:: 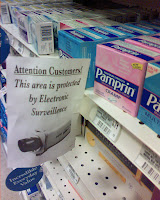 i laughed out loud. someone at Giant Eagle Knows. then i thought, why would they put that sign there? maybe it was the condoms that hung above it. when you gotta have some, you gotta have some, maybe? well, i went with that theory for a moment, until i turned around and saw this: 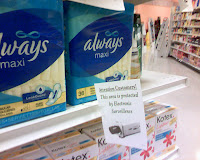 so someone at Giant Eagle does Know.